On most treks you’ll certainly see yaks in Nepal! These incredible, prehistoric looking creatures have many uses in the Himalaya. Just be careful not to get in their way!

I saw yaks for the first time when I trekked to Everest Base Camp. They were carrying provisions in the Sherpa village of Khumjung above Namche Bazaar. They were decorated with patterned rugs, bells and tassels. Some were even more colourful than the vibrant Sherpa women in traditional dress!

It was higher on the trek, on the way to Lobuche when we often saw working yaks on the trekking trails, carrying food and equipment to the higher teahouses. It certainly explains the price of a Snickers bar at high altitude! Everything must be carried by yak, mule or porter, with very few teahouses occasionally receiving goods by helicopter.

My first personal experience with a yak is what led our group to shout “yak attack!” every time yaks came into view. A line of yaks walked passed us on a stone bridge. We stood well back to let them pass. But one particularly large yak decided to give me a friendly nudge with its horn, which was rather intimidating to say the least! We quickly realised it’s not sensible to get in their way (or even close). So, on hearing “yak attack!” we quickly climbed up, off the trails and balanced precariously, waiting for the yaks to pass! 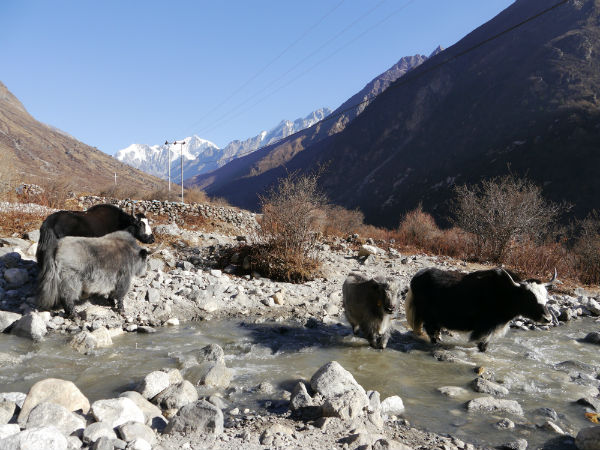 Not Just a Pretty Face

Yaks in Nepal have many uses. They’re not sacred, but they are deemed to be the most important animals in this region. Yak cheese is very popular. I was lucky enough to taste some in Gokyo (west of the Everest Base Camp trail). It’s actually pretty good and sustained us quite nicely on a challenging day hike!

After our very long day crossing the Thorong La Pass, we ordered a yak meat pizza in Muktinath. The rich red meat was very lean and tasty.

I haven’t tried it, but I imagine traditional butter tea made with tea leaves, yak butter, salt and water is an acquired taste. Try it, you might like it!

With their long thick hair, it’s no surprise that you can find all sorts of garments made from yak wool. (Watch out for ‘yak wool’ that is in fact not yak wool!). The most unusual discovery was the use of yak dung. It’s collected, dried and stored for winter in many remote areas of the Himalaya. It’s burned in large stoves to provide heating. Sadly, it seems the burning dung produces tiny black carbon particles that are contributing to glacial melting. Yet having seen how Nepali people live at such high altitudes well above the treeline, I’m not sure what their alternatives are.

Yaks in Nepal are an amazing sight to behold, but I recommend you stay out of their way for your own safety!

Previous postThings to Do Before You Go to Nepal
Next postSpend a Day in Pokhara to Unwind After Your Trek!